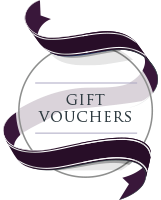 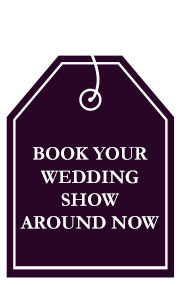 The long association between the Jameson family and Portmarnock begins when John Jameson III, the
grandson of the founder of the Jameson Distillery at Bow Street, moved to St. Marnocks in 1847. He and
his wife Anne had 5 children, the youngest of whom, Willie, was born in the house in 1851.
He brought with him two magnificent portraits by the Scottish artist Sir Henry Raeburn of his
grandparents, John and Margaret Jameson, these portraits are now on display at the National Gallery of
Ireland, while reproductions hang in the hotel bar.

The move to what was then the countryside was made possible by the advent of the railway, which
meant John could travel easily into the centre of Dublin where he oversaw all operations at the
Distillery. John died in 1881 when the house was inherited by his eldest son John Jameson IV . In 1895
he began rebuilding it to the design by Sir Robert Stodart at a cost of £12,000. Gate Lodges and other
buildings were added in 1896 at an additional cost of £2,000. At this point, the main building contained ten bedrooms. John also took the opportunity to have the Jameson family crest, a ship in full sail and the motto ’Sine Metu’, Latin for ‘Without Fear’, incorporated into the building decoration. Part of the crest can still be seentoday on the exterior wall of the original entrance. Today every bottle of Jameson produced carries the same emblem and motto ‘Sine Metu’.

John, who became president of the local Golf Club at Portmarnock, along with being patron of the local
school, was married twice, first in 1870 to Elizabeth Collins and secondly to Mary Elizabeth De Pree, but bore
no children. So, on his death in 1920, the house was left to his brother Willie Jameson (1851 -1939).
Willie and his first wife Henrietta Haig (d. 1928), lived between St. Marnocks, England and the Continent.
Henrietta was a famous society hostess and St Marnocks would have been the scene for many convivial
parties and gatherings. Willie was also keenly interested in horse breeding and kept extensive stables at
the house. His horse, Come Away, won the Grand National Steeple Chase in 1891.

As well as being a socialite and a sporting man, Willie was one of Europe’s leading yachtsmen during
the golden age of yachting, 1880 -1890. Friend to the Prince of Wales, later Edward VII, Willie
persuaded him to build a royal racing yacht to stimulate interest in big class racing, and the Britannia
was built to Willie’s specifications. Gifted with a sparkling wit and quick tongue, Willie became close
friends with the British Royal Family and frequently dined on the Royal Yacht as guests of the King, and
later his son George V. In 1907, King Edward VII, along with his wife, Queen Alexandra visited
Portmarnock as guests of the Jameson’s.

After the death of his first wife Willie married again in 1931 to the Dublin artist Flora Mitchell and St.
Marnocks became a regular visiting spot for Dublin’s artistic community, Walter Osbourne the painter
was a frequent visitor to Portmarnock where he came in the summer months to paint. The painting by
Osbourne ‘The Ward Hunt’, now in the National Gallery of Ireland, features Willie Jameson as one of
the hunting figures. After Willie’s death Flora sold the house in 1945, and the formal link between the Jameson’s and Portmarnock ended. 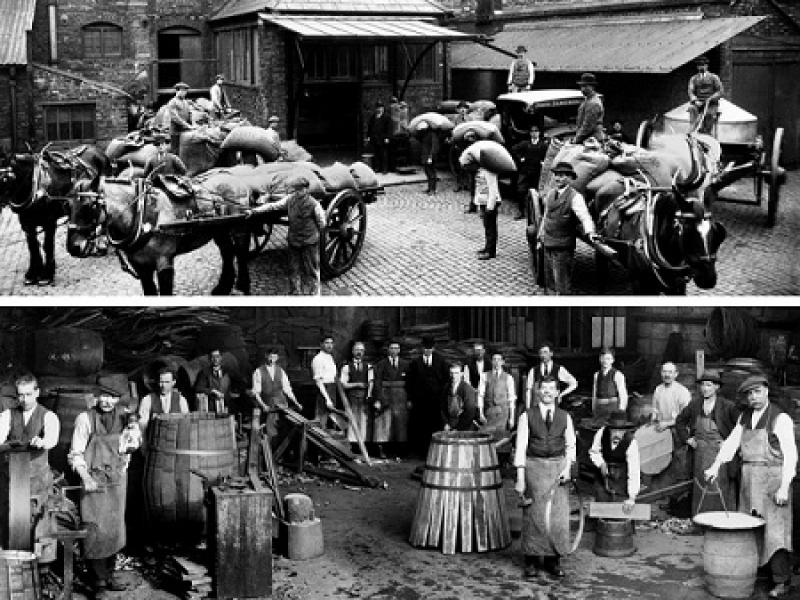 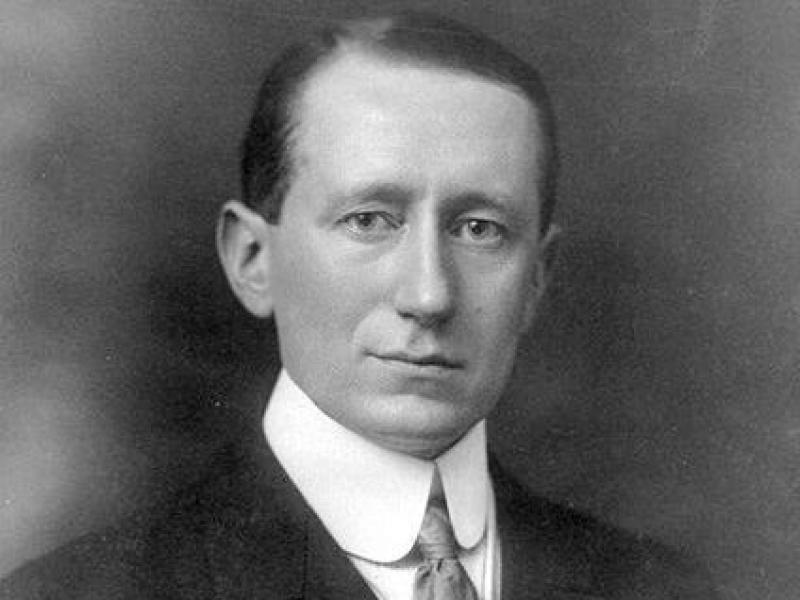 The Marconi ConnectionInventor of the wireless, was a son of Annie Jameson and as mentioned above, a grandson of the 'fourth son', Andrew.
A Family of Creators 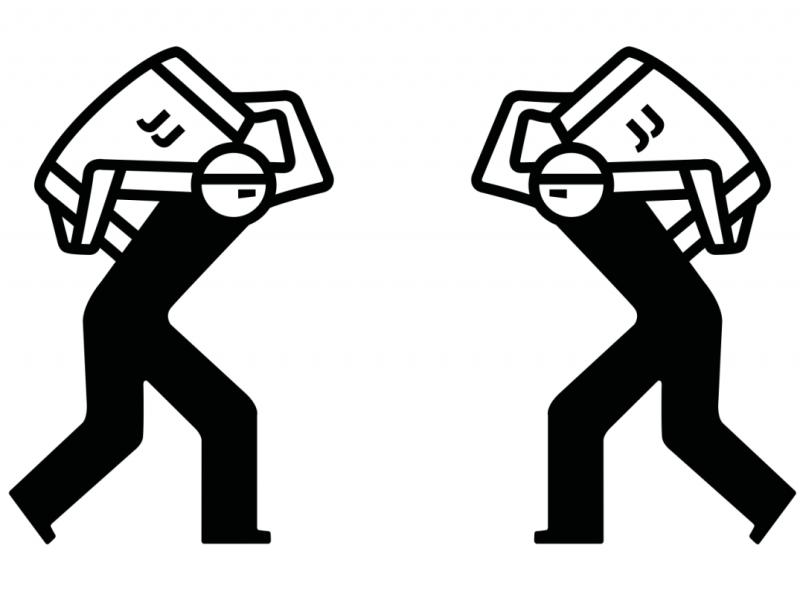 Jameson's Barrellman
The Meaning Behind the Logo 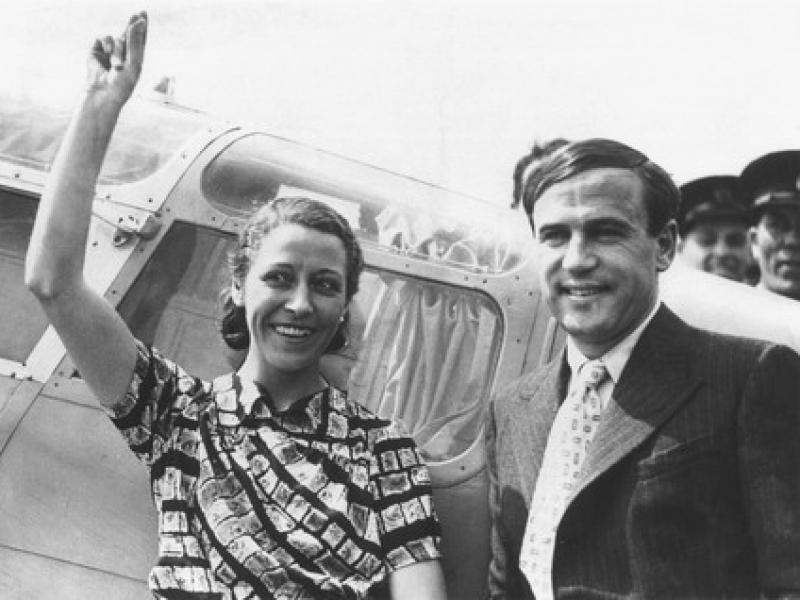 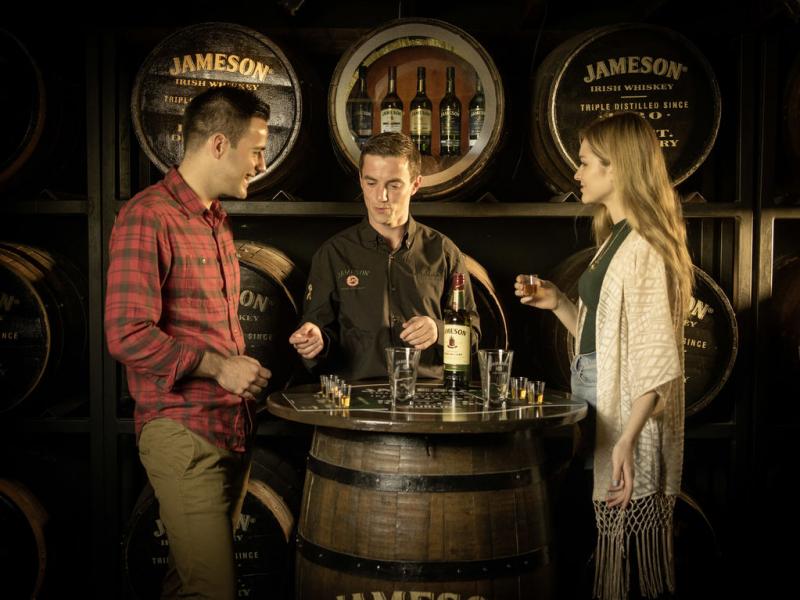 Jameson DistilleryEnjoy a tour and whiskey tasting at the birthplace of Irish whiskey in Dublin.
History in the Making